Bryan was 8 years old when he was matched with his Big Brother, Bob Smith. Bryan lived with his mother and older sister following his parents’ divorce, and his mom connected with Big Brothers Big Sisters to encourage a positive relationship with a male role model. Bob had been involved with Big Brothers Big Sisters for a few years, supporting the agency’s annual Big Swing Charity Golf Tournament, and decided that he could offer some time and friendship to a young man by becoming a Big Brother. Bryan and Bob were introduced in August of 2005 and graduated from Big Brothers Big Sisters in early 2015 when Bryan turned 18.
Reflecting on the early years of their relationship, Bryan remembers visiting Bob’s house frequently, where they played lots of board games and made dinner together. Throughout the years they have often enjoyed bowling, going to the movies, fishing, boating and going out to eat. As the owner of Sebasco Harbor Resort, Bob spends his summers in Phippsburg and would occasionally pick Bryan up or drop him off by boat in Cundy’s Harbor where Bryan’s mom would meet them. Bob says that Bryan is his first mate on the boat. They also enjoy golfing at the driving range and mini-golf course, and played together in a golf tournament last summer.
Bob took Bryan to his first Red Sox and Celtics games, and they attend a game at TD Garden pretty much every year now. Bryan admits that he didn’t like basketball much when he was young, but Bob’s enthusiasm was catching and he has grown to really like it. Bryan played pick-up basketball in high school, and Bob attended many games.
Over the past few summers Bryan had his first full-time job as a dock boy and bar back at the Kennebec Tavern. His experience with Bob on his boat was helpful, and Bob feels that this was a great first job and a good opportunity for Bryan. After Bryan completed driver’s ed and needed to log hours to get his license, Bob took him driving around the peninsula communities which yielded many opportunities for good conversations. Bob remembers driving with his daughters and being a little more relaxed than his wife was about the experience. He was happy to support Bryan and his mom by helping Bryan learn how to drive.
Throughout Bryan’s high school years he and Bob still saw each other at least a couple times a month and agreed that their time together was always relaxed and fun. Bryan said that he still does things with Bob that he doesn’t do with his friends, like going out to eat and to the movies. Bob taught him how to drive, to fish, to golf and introduced him to liking basketball. Bob chimed in that Bryan is an excellent driver, and joked that he also taught Bryan how to put a napkin in his lap. He expressed that he’s tried not to be overbearing and respects that Bryan is kind of a quiet kid who seems more comfortable figuring most things out by himself.
Their match graduated from Big Brothers Big Sisters’ program when Bryan turned 18 in January, but their long term friendship will leave a lasting impact for both of them. This fall, Bryan started his first year at the University of Maine in Orono. He and Bob are still in touch on a regular basis, and Bob will continue to encourage Bryan to figure out what makes him happy. They look forward to an ongoing friendship 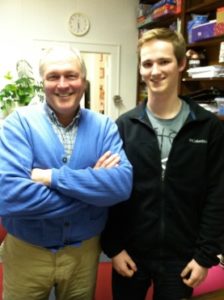