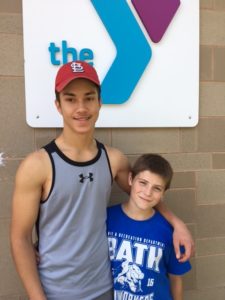 Tyler and his Little Brother Jhonan

Tyler Scorfina, a high school junior, recently started his second year as a Big Brother in our Site-Based Mentoring Program at the YMCA. Tyler and his Little Brother, Jhonan, were one of the first matches in a pilot program pairing Morse High School mentors with Bath Middle School mentees. Tyler and Jhonan both look forward to meeting up at the YMCA each Tuesday after school to play basketball, racquetball, run on the track, use the climbing wall and participate in activities with other Bigs and Littles. “It’s really fun and I am always happy to hang out with Jhonan,” Tyler says. Jhonan, an active and athletic seventh grader says with a grin, “Tyler is really fun and nice!”
Being a Big Brother last year was a new experience for Tyler, but his experience with Big Brothers Big Sisters started as a Little Brother when he was seven years old. Tyler explained why he decided to become a mentor, “I thought it would be a cool experience to do what I went through as a kid, for someone else.” Initially matched for over a year with a Big Couple, Tyler was fortunate to build multiple positive relationships in Big Brothers Big Sisters’ programs throughout his childhood. Through the Bears & Cubs Program he enjoyed having a college Big and spending time on the Bowdoin College campus.
At age 11, Tyler was matched with Big Brother Ryan in a six week summer program at the YMCA. The pair connected so well during this brief time that they transitioned to the Community-Based Program, which gave them the opportunity to develop a longer-term relationship. “Ryan was the ultimate Big; they really connected,” says Lynette, Tyler’s mother. Ryan came to Tyler’s band performances and baseball games, and they had fun hiking, fishing and making homemade pizza. “We had a lot of things in common; he was just a really cool guy and it was easy to connect with him.” Tyler says. After Ryan moved out of state to pursue a Master’s Degree, Tyler’s last Big Brother was a retired gentleman whom Lynette expressed was like a supportive grandparent-figure.
Raised by his mother, the relationships Tyler built through Big Brothers Big Sisters provided him with a positive male influence. Tyler says that for him, having a Big Brother was “kind of like having a second parent who was also my best friend.” Lynette expressed, “I am very grateful as a parent for this fabulous program. Big Brothers Big Sisters created opportunities for Tyler to try things he wouldn’t normally get to try. It helped him learn how to relate to people and get to the point of feeling comfortable in his own skin.” She shared that she is proud of Tyler for becoming a Big Brother and giving back in a meaningful way, “I think it shows character and some of that character came from the program initially.” 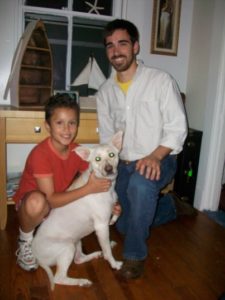 Tyler and his Big Brother Ryan